Stuttgart’s traditional annual spring play fell on the 21st and 22nd of April this year. Based on E. B. White’s Charlotte’s Web, this year’s performance was executed brilliantly by cast and crew alike. Drama teacher Ms. Brandi Johansen seized the few months she had and put together an excellent group of actors and actresses.

The play Charlotte’s Web was presented over the course of two nights; at 1830 on Friday, April 21, and 1400 on Saturday, April 22. Friday’s viewers saw the Period 7 drama class perform, while Period 5 put on their show on Saturday.

“[Charlotte’s Web] is a unique novel in that it deals with not only friendship and families, but also death and loss. I think Mr. White did a great service to children by allowing them to… understand the concept of love, loss and death in such a simple, poignant way,” Ms. Johansen commented on the work pre-performance, and her students and audience agree.

The set for the play is entirely unique to Stuttgart’s performance: the wooden “barn” was built by cast members and their parents. The blueprint for the project was designed by Mr. and Mrs. Ogershok, parents of Conor Ogershok (who played the role of Homer), and the set was completely put together and painted on Saturday, March 25. Over 40 volunteers were involved.

Several fourth and fifth graders were recruited to participate in the performance, playing baby spiders, fairgoers, judges or spectators. They seemed to extremely enjoy the acting process, learning about how “blocking” (or theatrical cues) work, the importance of teamwork, and, in the words of fifth grader Anaya Kelly, “Plays are awesome.” The experience offered the elementary schoolers a chance to work with high schoolers and see what a high school class can look like.

For most of both periods’ casts, the greatest difficulties that the performance created were the blocking cues and the memorization of lines. Getting into character and working with the rest of the cast was the most common answer to what the easiest aspect of the play was.

The technical crew for the production was made up of mostly students, with the exception of Mr. Scott, who helped run the sound and lights from the tech box above the auditorium entrance. Derek Ng and Matthew Richards were assigned only the first night, but they returned for the Saturday showing as well, due to absences.

“It really does take an entire village to put on a show, and it really needs the tech, especially the tech,” senior Gabby Falvo, Period 5’s fantastic Charlotte, elaborated on the importance of the technical crew. While not all of the characters in either period had mics, those that did relied almost completely on the few in the tech box above; adjustments made in-show provided the best possible experience for the audience.

All that attended either showing of the play were impressed by the professionalism and elegance with which the performance was pulled off, and both the cast and their teacher are proud of their accomplishment. 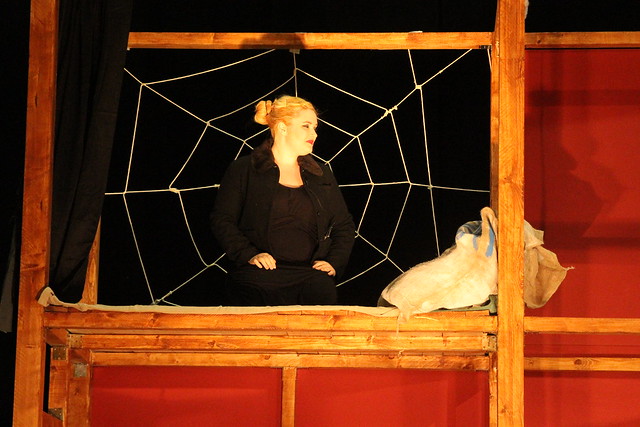