The Army Junior Reserve Officer Training Corps (JROTC) is a program offered to high schools that allows students to develop character, achievement, leadership skills, and experience diversity among their peers. This program means even more to the cadets it has fostered. “It has taught me the true meaning of citizenship, leadership, and teamwork,” comments C/CPT Fallon Dickinson (SHS’18), while her peer C/CPT Tevis Amblad (SHS’18) described JROTC as “a way to help people discover who they really are in their community.”

Young men in uniform and lovely ladies in flowing gowns came together to celebrate the progress the battalion had made and give thanks to those who had supported them during the JROTC Ball on March 4, 2017. Student-organized and student-run, this ball is one of the few events that students are solely responsible for. “This was my first official event when I took command of the garrison,” Garrison Commander Colonel Glenn K. Dickenson remarks. “All the excitement and energy made it such a great experience.”

As the ball began, a long line of guests streamed through the lobby as they moved through the receiving line, where members of battalion shook their hands and they were directed into the ballroom under a canopy of raised swords. C/CPT Sydney Smith (SHS’18) and C/2LT Hannah Rhoden (SHS’18) began the official ceremony by introducing C/CPT Juliet Adams (SHS’18), who sang a beautiful rendition of the German national anthem, followed by an equally alluring presentation of the American national anthem sung by C/2LT Damirelys Perez (SHS’19). Rhoden then conducted the symbolic setting of the table for the MIA and POW soldiers that could not join the festivities. C/CSM Callum Funk (SHS’18) set the empty table for one in a sobering display of respect and appreciation. The silence weighed heavily over the audience as an invocation was given by C/CPT Sarah Steers (SHS’17).

The solemn mood was shifted to one of amusement as five toasts were given: to the United States, to the President, to the men and women of the Armed Forces, to the guest of honor Brigadier General Donald C. Bolduc, and finally a bottoms up toast to the ladies in attendance. With the thought of the empty table still fresh in the minds of those attending, a call rang out and the cadets all stood to attention in unison, joined in spirit by those not present. As one, the cadets recited the Cadet Creed, promising to be outstanding examples of moral values and honorable actions. One by one, each company shouted their company motto and took their seats.

The Honor Guard stood at attention as the JROTC Ball Queen and her runner ups were announced. C/CPT Eileen Dickinson (SHS’18) was announced as second runner up, with C/CPT Sydney Smith as first runner up. C/LTC Meaghan Ambelang (SHS’17) was crowned Queen and, together with the guest of honor, General Bolduc, cut the beautiful (and gigantic!) cake with a saber. A wonderful meal followed the crowning as discussions among tablemates rose to a dull roar.

Soon after the main course was served, the drill team put on an amazing performance, spinning their rifles with expert ease. VFW Liaison Joe Holder presented multiple awards to acknowledge the hard work done by many students, including a military excellence award given to Callum Funk and a marksmanship award given to Fallon Dickinson. C/MAJ Wyatt Putnam (SHS’17), commander of the drill team, recognized his team for their amazing performance and their hard work. Juliet Adams, the Ceremonial Officer, recognized the Color Guard and the Honor Guard for their wonderful work as well. Rifle team commander C/CPT Macy Kimball (SHS’18) recognized the rifle team for their success during the season as they won at the European Championships and placed first in Nationals in Ohio and are traveling to Alabama for the All-Service Nationals on March 20. Stuttgart High School’s Assistant Principal Tessa Moss-Beaman was called to recognize the organizers of the event and went on to praise all of the cadets for their respect, kindness, and upstanding character.

General Bolduc followed Mrs. Moss-Beaman’s wonderful speech with an inspiring address of his own. He commended the JROTC program for “giving students direction” and helping them nourish their values. Throughout his speech, General Bolduc expressed his wish for all the cadets (and all other young people in attendance) to be successful in all of their endeavors. He ended his powerful allocution with inspiring words: “Failure builds character…[so] keep moving forward.”

The Color Guard returned to retire the colors and finally, the moment everyone had been waiting for, the dancing, began. 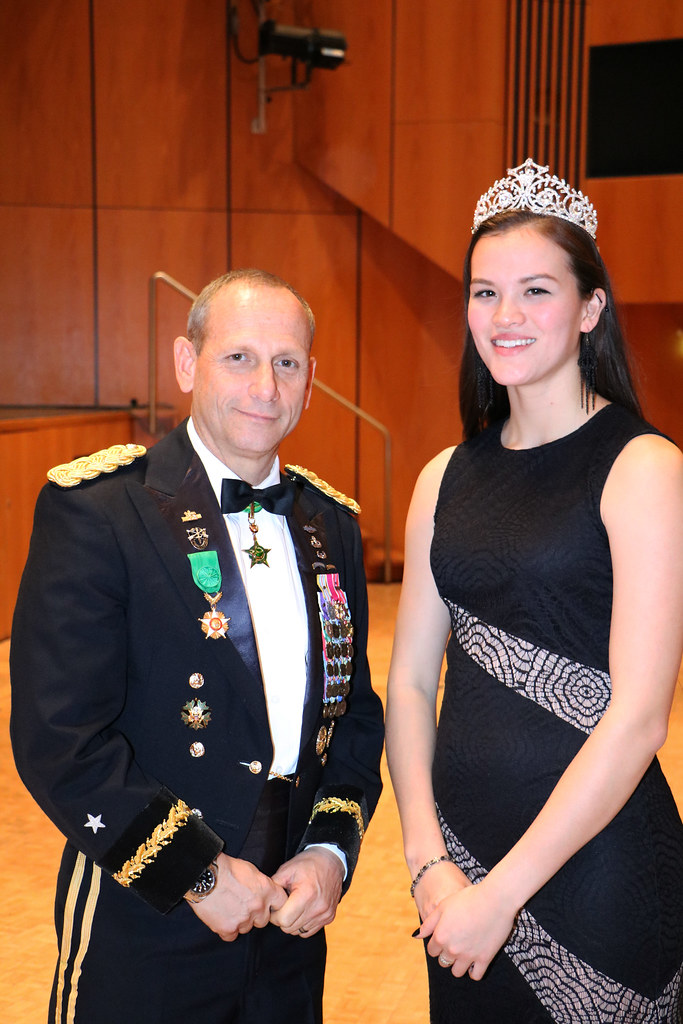